Deal Me In, Week 5: "Telling" by Grace Paley

My card this week was the 5 of clubs, and it selected for me a very intriguing story by Grace Paley, an author with whom I was previously unfamiliar. Not only is "Telling" intriguing, it's also touching and shows transformation of a kind in the protagonist, an essential component of any story as far as I'm concerned.

The story is told from the point of view of "Iz" Zagrowsky, an elderly man watching his grandson Emanuel in the park one day. He's a retired pharmacist, and he is suddenly approached by one of his former customers, Faith, who comes over to talk to him. (In my research on Paley, I found it interesting that Faith is a character who appears in several of her stories.) She recognizes him, certainly, but she's drawn to talk to him because of two other reasons: 1) Emanuel is black, and she's wondering what Iz is doing with a black child in the park, and 2) she wants to know whatever happened to Iz's daughter Cissy, who turns out to be Emanuel's mother. And therein lies a tale, as they say.

Unfortunately, Iz recognizes Faith as well -- she was part of a group of women who turned against him due to perceived racist and sexist activity on his part back in the day, and they ended up picketing his pharmacy. Iz admits to himself that he didn't like the way the neighborhood around his pharmacy was changing, but his racist activity amounted to waiting on his established customers first, while letting the new customers (black and Hispanic individuals sent into the store as a "test" for Iz) wait to be served longer than they thought they should be. So of course he feels somewhat betrayed by people whom he thought were his loyal customers.

On top of all that, Iz's daughter Cissy, whom it turns out was mentally unstable, is set off by the picket lines and begins to picket as well. She also curses at her parents and sings selections from Messiah outside the pharmacy. So they send her off to a mental hospital. There, she suddenly becomes pregnant, and it turns out she's carrying the child of one of the black gardeners. Iz's eventual acceptance and embrace of this event in the form of helping care for his grandson completes his transformation I mentioned earlier.

The title of the story (something that always seems to fascinate me) comes from Iz's need to tell this woman the things she doesn't know but which she needs to know, in his opinion. This passage in particular speaks to that theme:

Then I thought, Calm down Zagrowsky. Because for a fact I didn't want her to leave, because, since I already began to tell I have to tell the whole story. I'm not a person who keeps things in. Tell! That opens up the congestion a little -- the lungs are for breathing, not secrets. My wife never tells, she coughs, coughs. All night. Wakes up. Ai Iz open the window there's no air. You poor woman, if you want to breathe, you got to tell.

This was an excellent story, well worth the read. I selected it from The Best American Short Stories 1986 volume, and it was originally published in Mother Jones.

The Deal Me In short story challenge is hosted by Jay at Bibliophilopolis.
Posted by Randall at 7:25 AM 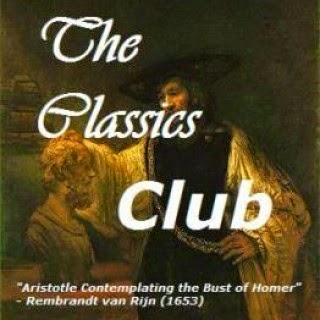